Hi. How can we help?

Analytics provides lots of functions that perform different mathematical, logical, and table-based calculations. You can find a more in-depth catalog of available functions on the Looker functions and operators page.

These are categorized in five different ways:

This article includes ten of the math-based functions.

Returns the "nth" largest value from a range, where "n" is freely defined. Requires two arguments: the range and which largest number you want to view.

For example, if I want to find my highest daily sales total, I could build...

If it is saved properly:

Now, because the calculation looks for the first largest value, the same value appears in every row ($21,050.72).

After saving, this is the result:

Returns the largest value from a defined range. Unlike "Large", "Max" requires only one argument: defined numeric range.

Mean, Median, and Mode are the corresponding measure of average value from a range: 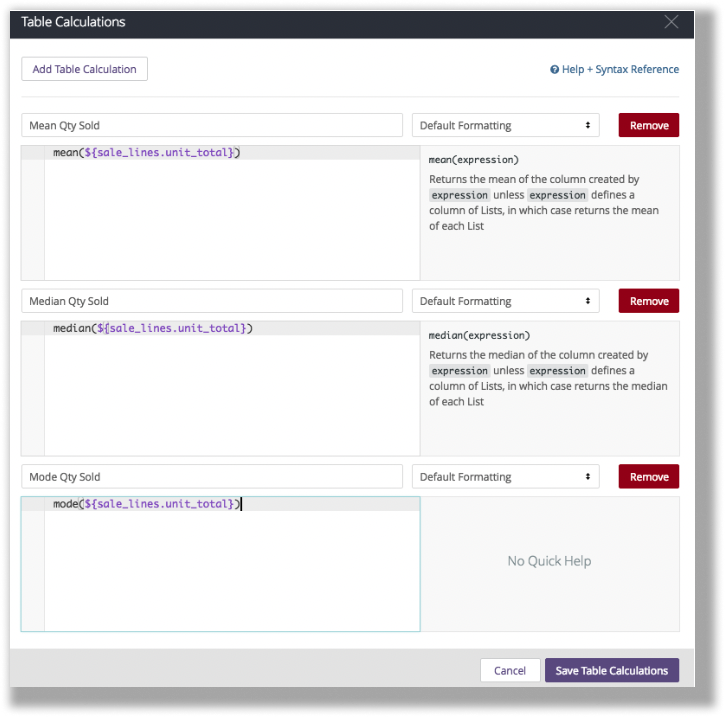 This example is finding the mean, median, and mode of the number of items sold on a sale last week.

If the calculation is properly:

Min returns the smallest value from a defined range. The required one argument: defined numeric range.

Round rounds a number up or down to a defined number of decimal places.

Say you want to look at total sales for the past six weeks and determine what the average weekly quantity sold is.

The Round function needs two arguments. The first argument is which number is being rounded, and the second argument is how many decimal places we want to round to: 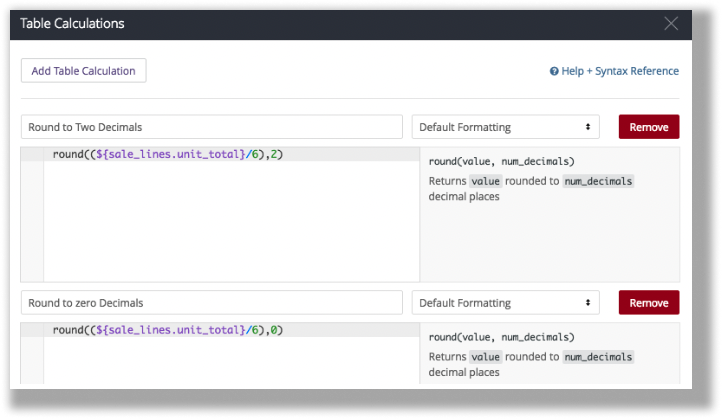 In this example, the number to round is the six-week weekly average: (${sale_lines.unit_total}/6), and the number of decimals is 2 in the first cell, and 0 in the second.

If the calculations are saved properly:

Running_total is used to add all values in sequence, for example, to see what year-to-date totals are per day:

If the calculation is saved properly:

Small, the opposite of Large, returns the nth smallest value from a range where n is freely defined. It requires two arguments, which field to look at, and which is the smallest number.

For example, to see what my lowest daily sales:

If the calculation is saved properly:

Sum returns the total value of a visible range and does not include values not displayed on the table. It requires one argument: which range is being summed.

To return the sum of total sales, for example:

If saved properly, here is the result:

Was this article helpful?

0 out of 0 found this helpful